One of the most difficult choices that a student has to make is what to study in his or her secondary and tertiary education. With endless avenues of opportunity, it can be a stressful yet exciting time to discover one’s interests.

The Philippine Business Coalition for Women Empowerment (PBCWE) strives to create gender inclusive workforces that represent women in all fields and sectors. Career and subject selection processes at the secondary and university level are pivotal moments that can heavily influence a student’s career path post-graduation. By encouraging female students to pursue careers that are stereotypically “male dominated” specialties, we hope to bridge the gender gap within Philippine workplaces.

However, a glaring problem that has taken precedence once students have settled into classes is the appearance of a confidence gap within male and female STEM students. In all fields of STEM (Science, Technology, Engineering and Mathematics), male students are exceedingly more confident than their female counterparts. This warrants the fundamental query of how a female student’s lack of self-confidence implicates the conclusion of her studies. The study discovered that persisting self-confidence issues has affected the general certainty of career plans for females – being 6% more “hardly certain” than their male peers.

Confidence levels across different STEM subjects among males and females 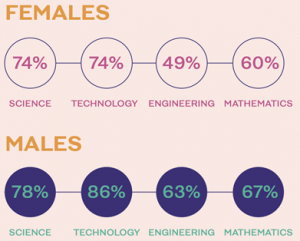 Given its detrimental effects on the female student population, PBCWE intends to open up the conversation by discussing what causes these mass confidence disparities between genders. PBCWE Executive Director Julia Abad recently wrote an article analyzing why a gender confidence gap persists, and how we can close it. Societal expectations and gender stereotypes are to be heavily blamed – and while several institutions have attempted to tackle the social stigma against women in STEM, there is still a clear absence of female participation due to its perception of being a male-dominated specialty. If genders are driven by personal interests and skills/abilities when it comes to course selection, it becomes understandable that females feel dissuaded from the STEM field as a result of gender norms that have imprinted on them since youth. It’s possible that an absence of media representation for women in STEM has drilled other academic interests into females, and that a lack of confidence in their STEM abilities has allowed females to feel the need to resort to other offerings. This creates an unnerving cycle of females either dropping out of STEM, or avoiding the field altogether.

Resolving this confidence gap comes from deeply rooted systemic change, by altering the social structures that children grow up with. One place to start making progress in is by looking towards the primary influencers in a student’s academic life, being their parents and teachers. Encouraging females to consider paths within STEM at home could be done with simple acts, such as assigning “male inclined” chores or allowing them to play with heavy problem solving, mechanical toys. For teachers, merely providing words of affirmation to female students in STEM classes, or heavily advertising STEM events at school as open to all genders could open the gateway to building up the confidence of young girls.

These little changes in the way that Filipinas are raised can completely rewire their academic mindset, invigorating them to explore the plethora of opportunities in front of them – including STEM.

For more information regarding the general gender confidence gap and how we can bridge these disparities, Julia Abad’s article can be read here: https://opinion.inquirer.net/137511/closing-the-gender-confidence-gap

Stem+ PH in partnership with Philippine Business Coalition for Women Empowerment (PBCWE) and YouthInsight, the full-service research arm of Student Edge aim to understand and determine the interests, perceptions, and even barriers in STEM education and careers between male and female students to help them better understand their own future, as well as the future of humanity.

Please fill out your details

Fill out the form to receive the full Philippines Youth in STEM 2020 report.

Thank you for your interest!